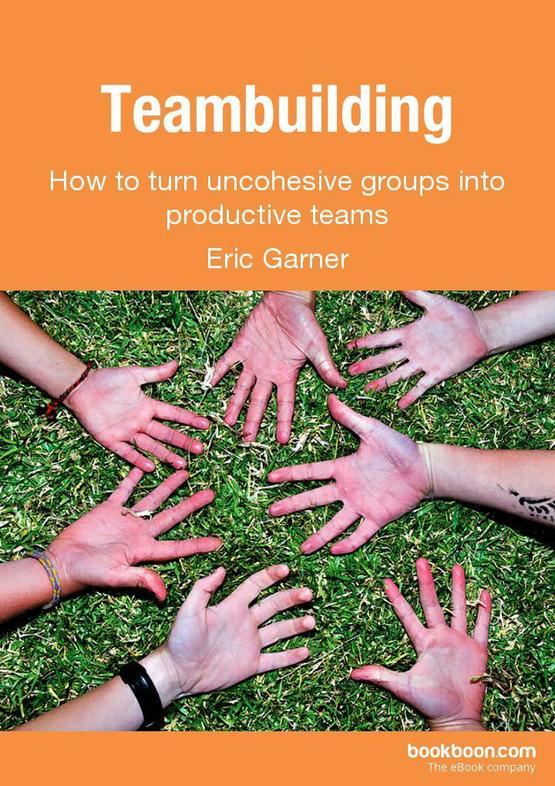 Teambuilding means shaping your people into a productive force. Seen in another way, it's what you get when Brazilians play football, the Berlin Philharmonic plays Beethoven, or your kids give their all in the school’s nativity play. If you are looking for this team effectiveness, this is the right eBook for you.

1 The Nature of Teams

Our lives are made up of belonging to groups. We are raised in families; learn at school in classes; and work alongside others in organisations. Group membership helps us define who we are. Here are some of the key aspects of being in a team.

Teambuilding means shaping your people into a productive force. Seen in another way, it's what you get when Brazilians play football, the Berlin Philharmonic plays Beethoven, or your kids give their all in the school’s nativity play. If you are looking for this team effectiveness, this is the right eBook for you.

1 The Nature of Teams

Our lives are made up of belonging to groups. We are raised in families; learn at school in classes; and work alongside others in organisations. Group membership helps us define who we are. Here are some of the key aspects of being in a team.

One of the best definitions of a team comes from John Adair who likened the individuals in a team to the pieces of a puzzle.

“A team is a group in which the jobs and skills of each member fit in with those of others as - to take a very mechanical and static analogy - in a jigsaw puzzle, pieces fit together without distortion and together produce some overall pattern.” (B. Babington Smith, as quoted by John Adair)

1.2 The Origins of Teams

The drive to be part of a team seems to be instinctive and probably originated when human beings came down from trees to live on the open plains. The challenges early man faced were problems of scale, for example, in facing a threat from a pride of lions, and problems of complexity, primarily in how to handle a range of environmental threats to find food, shelter, warmth, and safety. Leaving everyone to sort things out for themselves had limitations. The answer was to pool resources and co-ordinate what everyone did. The concept of the tribe was born which in due course evolved into the concept of the team.

teams provide stimulus and motivation to those in them

teams feel special to those in them.

1.4 The Emergence of the Workplace Team

The emergence of the idea of workplace teams owes its origin to the groundbreaking studies at the GEC Hawthorne plant in Chicago by Elton Mayo in the 1920’s and 30’s. Before these studies, the concept of teamwork at work did not really exist. There is, for example, no mention of teamwork in Henri Fayol’s principles of management in the early 20th century. However, as a result of Mayo’s studies, it became clear that the team has a significant effect both on the productivity of people and how they feel about going to work.

The series of experiments conducted by Elton Mayo showed that when a group is made to feel special, through being singled out as a team, it can produce spectacular results. For example,

under observation, the assembly room team at Hawthorne was able to produce high output even though the room’s lighting had been reduced to a level equivalent to that of moonlight

under observation, the team’s output rose consistently, despite a steady worsening in conditions such as heating, lighting, meal breaks, working hours

under observation, the absentee rate of the observed team fell by 20%.

Mayo’s experiments at the Hawthorne assembly plant foreshadowed the later work of Abraham Maslow who developed the model of motivational needs. In particular, the experiments showed that people are motivated when part of a group (their social needs) and when being recognized by others (their love needs). Here are 9 further ways in which a team can meet people’s needs:

achievement needs: “the team helps me to do more”

social needs: “in the team I can make friends”

recognition needs: “the team let me know how well I am doing”

spiritual needs: “there is a team spirit in our team which is very special to us”

learning needs: “I learn more from being in the team”

basic needs: “I can earn more money as a member of the team”

leadership needs: “I am able to use my leadership skills as a member of the team”

freedom needs: “I can be myself when I am part of the team”.

Stage the team is a group of people with loose links, eg sharing a building, meeting occasionally

Stage the team start to see themselves as a distinct unit with a life of its own.

Stage the team consistently achieve things together and evolve.

Writer John Maxwell says there are a number of laws that are common to all teams. These include communications, shared values, goals, vision, leadership, challenge, investment in the team, feedback, high morale, and knowing one’s value.

Here are the other 7 laws:

The Law of Significance: one person is too small to achieve greatness

The Law of the Niche: all players must add their own unique value

The Law of the Chain: the team is as strong as its weakest link

The Law of the Catalyst: all teams have players who make things happen

The Law of the Bad Apple: rotten attitudes ruin a team

The Law of the Bench: great teams have depth in reserve

The Law of Accountability: teammates must be able to count on each other when it counts.

Synergy is the idea that “whole systems, such as living things, behave in ways that cannot be predicted from the behaviour of their individual parts,” (Buckminster Fuller). In other words, synergy is a natural coming together of “bits” which results in an unexpected and remarkable whole. The human body and the whole of the natural world are examples of synergy at work.

sodium and chlorine (both on their own harmful) = salt

Sam’s bull pulled his wagon into a rut. Several of the wagons behind Sam stopped and demanded that Sam move his wagon immediately.

Sam stepped off his wagon, scratched his chin and yelled “OK Blake!” The bull in front of the wagon didn’t budge.

Then, finally, Sam yelled, “Now get going Hause!” and the bull pulled the wagon out of the rut.

Confounded, one of the other wagon drivers turned to Sam and asked him why he didn’t call the bull by the right name in the first place.

“Well,” Sam retorted, “if Hause thought he was gonna move that wagon out of that ditch all by himself we’d never have gotten out of here.”

Teams are the building blocks of organisational life.

A team is different from a group because it shares a common purpose.

In an age of global communications, the team can exist without ever meeting one another face to face.

Belonging to a team can satisfy people’s needs at a range of different levels.

The informal workplace team may be of more importance to how we work than the formal team.

The distinctive feature of teams is that they can grow and develop.